Very sadly this week, we learnt of the passing of one of our former coaches. Clive Simpson joined Mandale Harriers in 1983 and became one of our most dedicated coaches. He was a strong character who became not just a mentor to his group of athletes but over the years a well-loved father figure also. Both his son Robbie and more recently his grandson William have run and competed for the Club.

He will be dearly missed.

The funeral arrangements are as follows:

St. Bede’s Chapel at the Crematorium. 1100 on Friday September 6th 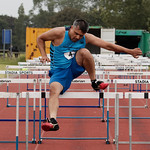