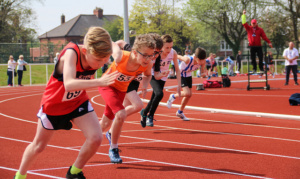 Athletes from all over the North East, representing all ages and abilities, arrived to participate in an impressive range of events. A Trio of Olympic and World Champion athletes Rabah Yousif, Richard Kilty and Chris Tomlinson popped in to inspire the athletes and their guests, signing autographs was their pleasure.

Attendance from over 25 different clubs demonstrates the continued popularity of the Cyril Elliott meeting, with over 210 athletes ranging from under 13 to senior athletes battling to run faster, jump or throw further than their last performance. This year the meeting organisers decided not to include un 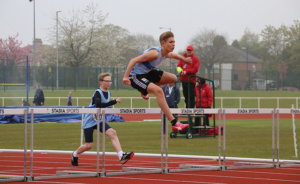 der 11 competitors as the club are running over the summer four quad kids style meetings called the Fantastic Four.

Out of the mist shone a string of extraordinary efforts and we were soon awash with smiles from well earned and valued PB’s, shortly followed by the promised sunshine! 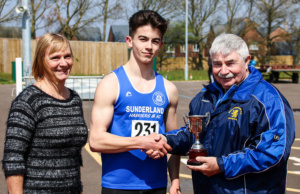 The last race of the morning was the Under 17 Men’s 400m Paul Thurlow Trophy won this year by Declan Murray from Sunderland Harriers & AC, the presentation party included the parents of Paul Thurlow and Middlesbrough Mandale chairman Kevin Morris.

At the lunch break in the hospitality suite the meeting manager Marino Rea Danilowicz thanked over 50 officials and volunteers who gave up their valued time, patience and energy to ensure all the events ran smoothly, safely and mostly to time!! He then went on to ask Mrs Thurlow to draw a surprise raffle prize of cupcakes donated by Claire Wilmot, the winner was Kate Brazukas a field official. 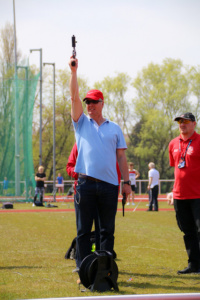 On the resumption of the afternoon events one of the sponsors of the meeting Hilton Wordsworth started the under 13 boys and girls 1200m race.

The meeting organisers would like to thanks the sponsors: Macks Solicitors and Hilton Wordsworth Financial Services for their generosity, without which events like this could not be run. Take a bow Cyril & Anne Banks and Dave & Sharon Welford who sponsored and organised a wonderful buffet to keep up our spirits and energy and the very enthusiastic cake-bakers from their groups.

Finally, thanks to all the competitors and their supporters who travelled from Carlisle and the Borders in the north to Harrogate in the south. It was a delight to share the talents of such a variety of local clubs demonstrating the North continues to develop a wealth of talent.

Further photos of the meeting by Mike Nixon are available here

This was the first open meeting to be held at the impressive new track and athletes especially the sprinters took full advantage of the more than favourable winds in the home straight, a distinct change from the 50 years of headwinds at the old Clairville Stadium. (All athletes Middlesbrough AC unless stated).

Leading performance of the day came in the under 13 girl’s 150 metres from Tamara Miller. Tamara who has already set a club record in the 75 metres this season set two more at this meeting. Using the strong winds to her full advantage she first broke the 100 metre record with a time of 13.34 seconds (+2.7), before smashing the 150 metre record with a time of 19.43 seconds (+3.5). That time moves the Dave Welford coached athlete to first place in the UK rankings for 150m and ninth on the all time list. Emily Moore was first in the 600 metres in 2 minutes 18.03 seconds. There were silver medals for Anabelle Robson in the 150 metres in 21.85 seconds and Abigail Pountain with 20.03 metres in the howler throw, Lilly-Mae Aspinall took bronze in the howler with 15.85 metres. 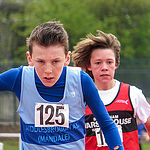 The in-form Alex Nixon moved into second place in the national UK rankings in the 200 metres winning the gold medal in an extremely fast 23.23 seconds, prior to that Alex had placed second in the 100 metres in another personal best of 11.56 seconds. Patrick Haycock took 5 seconds from his lifetime best in the 800 metres to win the gold in 2 minutes 15.01 seconds with Cameron Spence in silver position in 2 minutes 15.30 seconds. Hedley Wordsworth ran two personal bests winning two bronze medals in the 100 metres (12.37 seconds) and 200 metres (24.77 seconds). Myles Murray won silver in the 300 metres in a best of 41.52 seconds with Nathan Wood-Gordon taking the bronze in 44.60 seconds. In the field events Sam Byrne won the shot putt with a distance 10.28 metres, Sam then won 32.90 metres for bronze in the javelin. Hugh O’Hare claimed silver in the high jump going into second in the north east rankings.

Madeline Gillis, and Holly Clarke were double medallists in the under 11 girls age group. Madeline winning the long jump with an impressive 3.68 metres and bronze in the 150 metres in 23.73 seconds. Holly won the 150 metres in 23.13 seconds and was second over 60 metres in 9.70 seconds. Emma Milburn was good enough to win the howler throw with 15.20 metres with Toni Brazukas in third with 14.12 metres.

Catherine Burns improved her personal best in the shot putt by almost a metre to win with a throw of 8.71 metres to move into second place in the north east rankings and Georgina Saha won the high jump equalling her best of 1.25 metres. Emily McGee took the silver medal in the 300 metres in a time of 44.20 seconds this time also put Emily into second place in the north east rankings. Charlotte Paterson produced the performance of her life to take Fourth place in the long jump with a personal best of 4.70 metres. There were bronze medals for Jasmine Clark in the 200 metres in a personal best of 27.57 and Lorna Redpath over 800 metres also in a personal best of 2 minutes 33.07 seconds. New Marske Harriers were also in the medals in this age category. Amy Carter set a personal best of 12.95 seconds taking bronze in the 100 metres whilst the middle distance duo of Rebecca Tilley and Freya Bourke took silver (5 minutes 13.04 seconds) and bronze (5 minutes 13.11 seconds) in the 1500 metres.

Aaron Jeal continued his dominant form in the hammer winning with a great distance of 57.69 metres. Training partner Dan Nixon again improved his personal best in the hammer winning silver with 52.40 metres, Dan claimed his own gold medal and his second personal best in the javelin of 49.94 metres. Tom Weston made sure that the memorial Paul Thurlow trophy stayed in club hands winning the 400 metres in 54.20 seconds. Tom then returned to win the 200 metres in 23.74 seconds. Dominic Cuff won the 100 metre hurdles in 15.04 seconds and silver in the triple jump with 11.74 metres. Ben Bergstrand was the winner in the 1500 metres in a time of 4 minutes 43.52 seconds. The final two silver medals of the competition came from Caleb Hanif in the 100 metres in a personal best of 11.67 seconds and Ryan Nimmo in the 200 metres also in a personal best of 24.34 seconds.